Co-curated and Text to the exhibition by Chiara Valci Mazzara 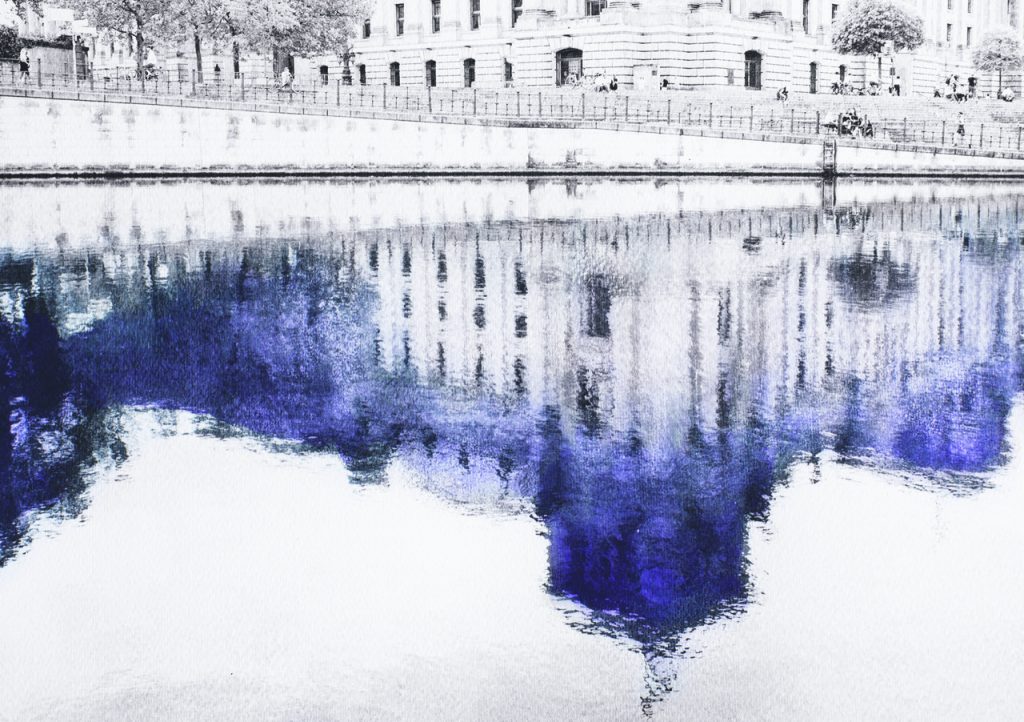 Text to the exhibition:

Where the essence is the movement, nothing stands still.

The  water, the tide, the change, the growth. The mutation, the ever changing yet consistent, forceful flow.

Hidden in the water there’s much to move inwards and towards: a communal source, the stream, a continual, endless, resurgence. From the singular to the whole, from the whole to the human.

And if anything does stand still -or if it appears as being so- it quietly mutates through an ever changing rhythm, composed of a million of microscopic twists and turns, a sequence of transformations so un-perceivable yet so decisive, a perpetual flow of forms, of life, like the water runs.

We live in a world populated by bodies -of water- in perpetual motion, a motion that continues forever in an unconcerned system.

Water is the source, the beginning and the end, the womb, the substance, the flow, the flux, the drift. It is entangled with time, a ceaseless change. Water composes the origin, connects us to a deeper perception, bridges our conscious awareness with the subconscious recognition of our selves.

Anna Kott re-walks the steps of Leonardo Da Vinci in her work about the water – chapter of ‘the circle of being’ ongoing project – by reflecting on the behaviour of the element, its inclusion and flow into, around and against humans and human architecture. The way we live with water. Originating from it.

Hidden in the water, implicit, underlying the surface and its visible twists is the undertow.

The undertow moves towards and inwards an opposite direction to the water on the surface; works deeper, flows away while the stream hits the shore, opposite from the surface current. And moves away from any shore. From the most expectable together with the unconscious ones too.

Many layers and patterns construct our life, the structures, the cities, the lines, the outlines. Water encloses those patterns, they flow as Anna’s painting brush, as Anna’s body outlines on the glass. We are moving shapes, patterns, we are perfectly formed ever changing water based anatomy.

Many layers are forming our perception as happens in the artistic practice of Anna, where the chosen media serves the purpose of the study of the motion, where architectural photography, painting, drawing and installations enable the public to ‘immerse’ into an alternate state of consciousness conducted as electrified by the element – now- of the water.

The theories of motion are followed and beautifully interpreted by the artist as to unravel acute observations of the phenomena activated by the element. Those being formed, mirrored, and protagonist of the series of works presented on the occasion of her solo show.

Various dimensions are clearly visible moving and diving into the multifaceted landscape constructed by the pieces. The fluid motion of the water populates all the works of the artist: the city of Berlin, the carved outlines of Anna’s body moving through the portions of a large scale glass piece and the purple colour, the innuendo which refers to the luxury of the flowing water, too often taken for granted. Not understood in its power and richness.

There is geometry in nature, geometry enables, constructs.. the architecture is reflected in the water, the body is carved in the glass and moves on the painting: patterns repeats as the ever changing flow, as constant repetition of life.

Ephemeral yet concrete, the movements of Anna, her choices of media, her artistic process and works contain and reflect a possible gate leading to a re-evaluated awareness: to observe and restore a sense of belonging. The elements being part of us. The circle of being.

The autumn carries a wrenching sense of renewal, so silent yet powerful, opposed to the warmth and the blazing light of the summer, encloses promises of transformation, the quiet falling of leaves..a river not yet frozen..a time of the year when minutes glide on the film of the water …

Video to the show: