Curated by Vadim Zakharov and Chiara Valci Mazzara – artistic director of fontaine b. – with Gabriela Anco

Intuition (1968) – objects belonging to the performance alongside selected works

Joseph Beuys started his performance “Intuition” in 1968. Ever since, more than 12,000 copies of this plain A4-sized wooden box were made and sold by the artist himself for the price of 8 Deutschmark. Beuys created each drawing individually, two pencil strokes and the handwritten slogan “Intuition”. Establishing a dialogue with the viewer who became the owner, and who would know intuitively what the use of the object was. 1968 was a key year in the political realm, this performance spoke out against the materialism and social injustice.

The exhibition aims to continue the above artistic discourse through the original relics alongside other works from Joseph Beuys, in complementary exchange with works of contemporary artists.

Please join us on Friday November 17th 2017 for the  opening reception aperitif, on Saturday November 18th for a private viewing and Sunday November 19th for an intimate coffee and cake get-together.

Intuition is a kind of direct, immediate thought, which doesn’t come to terms with the inner workings of cognition: simply it’s there, it becomes apparent and it looks at us.

Similarly, void, the sense of nothingness, suddenly jumps into our lives leaving us, every time, a new means of interpretation of things which, by the way, does not imply touching, moving or modifying them. Plainly, it hits them.

A further closeness of the two phenomena can be found in their impalpable, though enwinding, transcendental matter.

They manifest themselves as a lightening, a river flowing endowed with a sempiternal truthfulness, which Joseph Beuys’ shaman sensitivity could not miss. In his Intuitions (a series he will produce almost all his life) the artist creates, through five wooden boards, a box at the bottom of which – as to enact a magic formula- he writes the word “intuition”, followed by one or two horizontal lines in pencil, just like the legendary rabbi Jehuda Löw wrote “truth” on the Golem’s forehead to awaken it.

Understanding that if linked to the void intuition can only represent itself under guise of a finite space, Beuys captures the mute essence inside the box to relate it, through segments, to the archetypes of human measures, that is: above, below, the horizon bound by contingencies, the limitless space.

A group exhibition held at Vadim Zakharov’s house and studio -of which he was curator with Chiara Valci Mazzara and Gabriela Covblic– payed a tribute to the artist trying to reason about Beuys’ work, has disentangled its meaning in a conversation among the works of eight artists. It has created, through an intriguing game of correspondences, a path of reflection about the relationship between the human being and the void, be it spiritual, physical or religious, upon which I will provide my point of view.

The work inaugurating this path belongs to Jacopo Rinaldiand it is entitled Milano anno zero(2017): the projection on the wall leads us inside a mysterious archive full of a thick fog, introducing us in a primeval atmosphere. Here one could feel as a new generation of mankind before the mysterious and powerful remains of a past and ununderstandable world, creating the first relationship between man and void, that is to say his very birth, which inevitably leads us to the three-parted question pushing our species since the start: Who are we? Where do we come from? Where are we going?

Next to this, we found the series 24 Idealphotos made inside of an orange(2002) by Vadim Zakharov, who, placing a camera inside of an orange, shoots a series of pictures, each coupled with a reflection, a research note, a musical pause. From this descends a perfect synthesis of man’s furious research, that New Man who, once won the planet’s darkness discovering fire, uses it to study the nature of things… to get nowhere. The boundless orange core of the inside of the fruit confirms the vastness hidden in our daily lives’ minuteness.

Nature offers no certainties: what the world provide is only vastness, allowing us to see a canyon in a little tile, a cloud in a spit on the sidewalk or the immense ocean inside a little orange.

In Sebastian Kusenberg’s self portrait’s (Selbst mit Handtaschen 2005) ruthless eyes we mirror the topic moment of History (and of our personal story) when man understands that there is nothing Supreme: God is dead, nothing is guarding us, our beliefs and our faith –whatever that be- are worth nothing. The scene appears in the immediacy with which one realizes –in the sound and fury of life- the nothingness of existence: the hieratic figure of the artist stands out in the middle, covered by a semi transparent veil, the same veil through which Maya imprisons us in the delusion of the sensual world, its perennial cycles and rebirth ever since featured in the hermetic representations. The artist holds a long pole from which several bags, presumably empty, hang.

Standing as a sun-dial gnomon, Kusenberg tells us that both behind and in front of us there is nothing but involucres, which we call years, seasons, events: they are empty but their weight is overwhelming.

The deeply revealing meaning of the portrait makes it a central focus of the exhibition as, from this point on, the path loses its yet slight inquiring quality.

Here we enter an ecstatic, fetishistic, divine dimension, as, once unveiled the absolute lack of stillness of things, the question rapidly becomes obsolete. A new mystery follows to each answer, in a frantic and never-ending circle : science thus hands over to hedonistic contemplation.

The first two pictures show a rectangle with three sentences regarding the phases of time on the top, and a kind of doggerel on the bottom, saying

On the lower panels the same score appears, featuring a slogan in the middle

Once again the artist links inextricably magical manipulation to political action, blending them in a single formula mirroring the game of measures and transformations of the world. The famous iconic slogan of feminist struggles of the 1970s assumes the woman – life catalyst par excellence – extrapolating her from the ethic and behavioral context typically petty bourgeois. Just like Art, femininity and existence cannot be caged in stereotypical traditions, they must be simply as they are in their ceaseless transformative flux.

Right in front of the print, placed as an inscription in a temple’s porticos, we find the entrance to Vadim’s studio where Mia Gourvitchand Henrick Strömberg’s works enthrone Beuys’s Intuitionand his aquatints from the series L’arte è una zanzara dalle mille ali.

The hall, core of the whole exhibition, shows a pyramidal composition, which contributes to emphasize the room’s sacredness.

The work The window(2017) by photographer Gourvitch, shows a dark surface where a flat grey rectangle intersects with another created by a shiny nick perceptible as a sort of threshold. Plato’s myth of the cavern comes to my mind, and the hermetic warning stemming from it is that we have got two kinds of (aesthetic) realities: the first is the image of the latter, while the second exists only as a passage, since a work (of art) cannot be but a means to ascend. This notwithstanding, the acritical atmosphere, belonging to void, to universe and gods, suggests that there is no difference between inside and outside, darkness and light: our only concern is choosing where to stand in this world. Thus, a door is virtually both open and closed at the same time.

A game of thresholds and surfaces occurs between Gourvitch and Stromberg. The former turns towards a hypothetical sky and the figure stands against a sun we can imagine thrusts its rays inside the dark space in which we are immersed. Stromberg’s parallelepipeds, on the contrary, lead us feet on the ground (being the work located on the ground, too), as they seem – in the reflection of their support – to endlessly stretch into the depth of the earth, maybe even in our very unconscious.

Two Intuitions rise on the wall between these two artists. Three more follow, stretching in an upward motion recalling the votive receptacles in the Shinto shrines.

On the right wall, more of Beuys’s aquatints: instructions, numbers, structures and sign deliria explode into a strictly rational chaos and trail on the print’s black surface.

Here Beuys seems to seal the union of these two paths, heaven and earth, inside and outside. That’s because Art is a sublime creature: its habitat has no borders, all can belong to it, it feeds on everything.

Three parallelepipeds , placed as a sort of tiny Stonehenge, appear in Strömberg’s work “Vertical Instructions 02”(2017) . The whole work seems to me as a human simulacrum. Geometry, its conceived shape, belongs to the world of humans. It implies a will of order, of naming of the things, of taming of Nature. Moreover, verticality is the moving witness of our imperfection; like the trees, ever since worshipped as the only creatures able to communicate with the sky, we are erect, too, we breached earth’s petty horizontality without being able to completely break free from it, our feet whisper to the ground, our heads plead the favor of the sun. We are but shapes in equilibrium on their same reflections in the deepest darkness.

Walking back to the corridor we abandon the sacred dimension to plunge into profane : Milovan Destil Markovic’ s series of portraits (Lipstick portraits 1996), obtained through lipstick background on velvet lead us back to flesh, to the exterior belonging of personality.

Here we face the second feature of post-void, opposing to the ascetic dimension: fetishism, the clinging to a quirk, the exterior self devouring everything else. The artist seals, in vaguely imperial-looking frames, the color women he portraits have worn on their lips for the most of their lives. That was the color of their words, their statements, their questions, their appetites, and their indignations. They succeed each other on the wall like they would in a mausoleum, flags over golden sarcophaguses of personality’s warlords.

We are accompanied by Hans Peter Khun’s sound installation throughout the exhibition: echoes and deep vibrations enfold the house in a metaphysical atmosphere, the white noise blends in a natural way with the environmental noises. Steps, greeting in low voices and various whisperings complete this ethereal mantra. From wide openings it suddenly shuts in two sharp beats which, resounding in the void, reopen the full breath of sound like a wave on the shore regaining its perpetual motion.

Curtains(2015), a photograph by Gourvitch, waits for us at the end of the corridor: the image of the trembling veils allows us a glimpse to a glimmer of light playing, once more, with a sense of undefined. The show ends but maybe it has just begun: to read a tale backwards means to create another tale. Maybe this is our task: to create stories inside stories, to take the plot as it is, as just one of the countless alibies not to finish, not to name, not to die.

Four of my drawings are displayed in the kitchen. I entitled this little series A drama for a deactivated skin(2017). It is a study on shells, empty involucres, which retain an incorruptible, immortal exteriority. It is the same stone-like firmness of a soul living the peace of vacuity, the depth of a precipice, the lightness of a feather: all elements I learned and carefully saved after this experience.

Then, behind the curtain there is the backstage, the remains of a friendly lunch, the road stretching as far as the eye could see in the void of night. 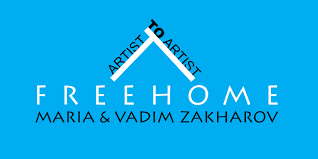