On the occasion of her first solo presentation in Berlin, Alter Ego, Aotearoa New Zealand born artist Gill Gatfield conceived a project in two chapters – a large scale crystal-glass sculpture and a public space virtual reality installation – which talk and expand towards the human being. Renowned for her minimal, conceptual and abstract sculptures, and for her inclusive public monuments, Gatfield’s project relates to the public, the architecture, structures and infrastructures of the city, the area of Berlin Mitte and the L40 building, an iconic black maze designed by Cosima von Bonin and Roger Bundschuh, home of the Kunstverein am Rosa Luxemburg Platz.

Inside the foyer of the L40, The Muses vibrate, float and emerge from the space and reverberate meanings. The installation centers the eye on three monumental glass figures, shining outward from halos of soft white shaded edges, lightly held to the ground by an over one-hundred year old pine timber beam. They are shaped as ‘I’, as pure ancestral forms, as deeply rooted and recognised syntagms, as totemic figures.

The sculptural elements – translucent glass planes, blackened timber and wall, measured space, fine lines and internal curves, create unexpected volume and speak about light and shadow, form and material, material as matter and language, ephemeral nuances and reflections. The language of the artist – her process, her system of references – takes shape into monochromatic transparent paradigms, suggesting fluidity and transitional moments in a realm located between sign, signifier and signified.

The Muses occupy a transient space yet they convey a transcript about form, shape, proportions and abstract figures that stand as guardians, protectors of meanings and visions. They tell stories through the material, stories that anchor on to the material itself and on the substance, the matter that constitutes the observable, the shadows and the light, as elements of a discursive approach. The Muses seem to decipher society’s paradigms through a magic lens by being, by echoing through phenomena. Hence the work is perceived as resolving complex, philosophical and sociological expressions by bending the matter and reasoning about atavistic shapes. Ultimately, The Muses reclaim our attention, enclose social and interactional paths, invite us to touch them, to feel, perceive them; they guide us through narrations whence we relate, they suggest an alternate path of intentionality, of meaning-making.

As the doors open on the second floor, the Siren awaits. The piece reveals itself in the form of an elongated ‘I’, red, crisp, bright. She stands as an Island, a siren who sings without sound and charms the eye, guarding our origin and destination coordinates.

Another ancestral form is to be seen in the sculpture Aroha (meaning love in Maori), a molten stone ‘X’, an emblematic shape, the witness of the process of connection, it marks a place, a message, anchored to the Earth’s core.

The second chapter of Gatfield’s Alter Ego lies beyond the L40 walls. Native Tongue XR is the extended reality alter ego of a sculpture carved from the heartwood of a giant tree buried in Aotearoa New Zealand before the last Ice Age. The analogue twin is a public artwork, a taonga (treasure), a totem steeped in its own place, another continent half a world away. The virtual reality sculpture, to be presented in the public green space between Almstadt- and Rosa-Luxemburg-Straße in mid-January, stands in simpatico with The Muses. It is a fourth I-figure, a sculptural volume described digitally in air, yet lifelike and perceivable, a spirit figure, proof of life, bringing the past into the present tense. Through the virtual rendering of Native Tongue XR, Gill Gatfield translates and transforms further her production, demonstrating her finesse of the artistic process, media and materials perception. At the threshold of reality and digital stimulation, the sensation of synaesthesia occurs, completing the Alter Ego journey into a multi-layered, poetic, philosophical world. 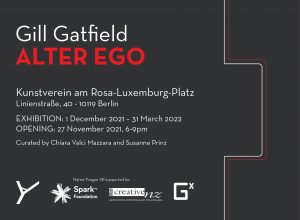