”An ephemeral banquet for the invisible guest: waiting for the bio-aristocrat”

‘The squirrel and the Grail’

In collaboration and with the support of Fondazione Morra, Naples, IT

Maurizio Elettrico is a complex and erudite artist and writer. His saga in seven volumes – The Squirrel and the Grail – functions, on the occasion of his solo show, as the vessel through which his magical, irreverent, profane, philosophical, mythological referred and fantastic world is introduced to the public, drawing him into this all embracing installation: the world of Maurizio Elettrico’s saga coming true. The public is invited to experience this immersive landscape including an opera sound piece the artist conceived for the exhibition.

The banquet for the invisible guest – consisting of a series of sculptural pieces installed on a banquet table surrounded by islands filled with astounding creatures and objects – also reminds us of more hospitable days.

The menu of the banquet will be available, alas the courses remain invisible… as well as the guest: the bio aristocrat.

Maurizio Elettrico ( Naples,1965) lives and works in Naples. After his studies in natural sciences, he focused his artistic research on the interdisciplinary relationships between philosophy, history and iconography. His artistic practice is characterised by the variety of materials he uses and the lexicon that he applies, ranging from freehand drawing on fine art paper or fabrics to various media including sculpture, installations realised with recovered materials, video, performance and writing. Elettrico re-invents the world into a new mythological reality where the radical secularisation of the sacred and science-fiction combine and where the distance between sense and nonsense is shortened so that their theophanic nature would become clearly deduced. The recovery of dissonant forms and materials opens the way to a magical world of medieval ancestry, organised according to a mysterious and ideological taste for alchemy, producing a visual pantheon that dissolves itself into a junction of intelligence, artistic creation and technological knowledge.  He has had numerous exhibitions in Italy and abroad, working with some of the most recognised contemporary art curators like Jan Hoet, Lorand Hegyi and Achille Bonito Oliva. He started his career in Naples, with a solo exhibition at Vera Vita Gioia’s Gallery in 1993.  His hometown has been a point of reference throughout his career, as shown by his ongoing collaboration with  Fondazione Morra, where his works are included in the permanent collection and where his artistic practice is developed and promoted. He started working abroad when the SMAK in Ghent (Belgium) acquired various pieces to be included in its permanent collection in 1997. In 2004, Edizioni Morra published The New Empire, a volume presenting a series of imaginary scenarios, revealing to the public Elettrico visions about alternative future worlds. Shortly after he produced a large-scale installation at the Padova Charterhouse and exhibited in Quadriennale di Roma at GNAM. In 2006 he presented his solo show Lo Scoiattolo e il Graal (The Squirrel and the Grail) at the Capodimonte Museum where he presented the characters from his book The New Empire. In 2007 he presented the exhibition Cervandro – Il Nudo travestito (Cervandro, the Nude in disguise) at Arte Contemporanea Pio Monti in Rome, and right afterwards a further solo show at Lipanje Puntin Gallery in Trieste. In 2009 he presented his work at the Venice Biennale – Arsenale-  and the Knokke Biennale in Ghent in collaboration with Hoet Bekaert Gallery. In the same year, his volume L’Infante demiurgo was published with Mimesis Edizioni, Milan 2009. In 2011, he participated for the second time at the Venice Biennale, and in 2013 at the multimedia exhibition Biorema at Paola Verrengia Gallery in Salerno. Since 2009 he has been working on a saga developed in seven volumes Lo Scoiattolo e il Graal  (The Squirrel and the Grail). In 2015, Elettrico presented Cibum Deorum, a large scale sculpture, as part of the exhibition L’Albero della cuccagna, Nutrimenti dell’Arte, curated by Achille Bonito Oliva and presented throughout Italy. In 2016, he had a solo exhibition at PAN Museum of Naples , Historia Supernaturalis, curated by Eugenio Viola

The number of visitors is restricted to 17 at a time. Please spread your visits over the whole opening hours. We will ask for your contact information upon arrival.

Video to the  exhibition :

Find the full video at: https://www.youtube.com/watch?v=d6WjkCF9byg&ab_channel=SeeArtTV

Invitation to the exhibition : 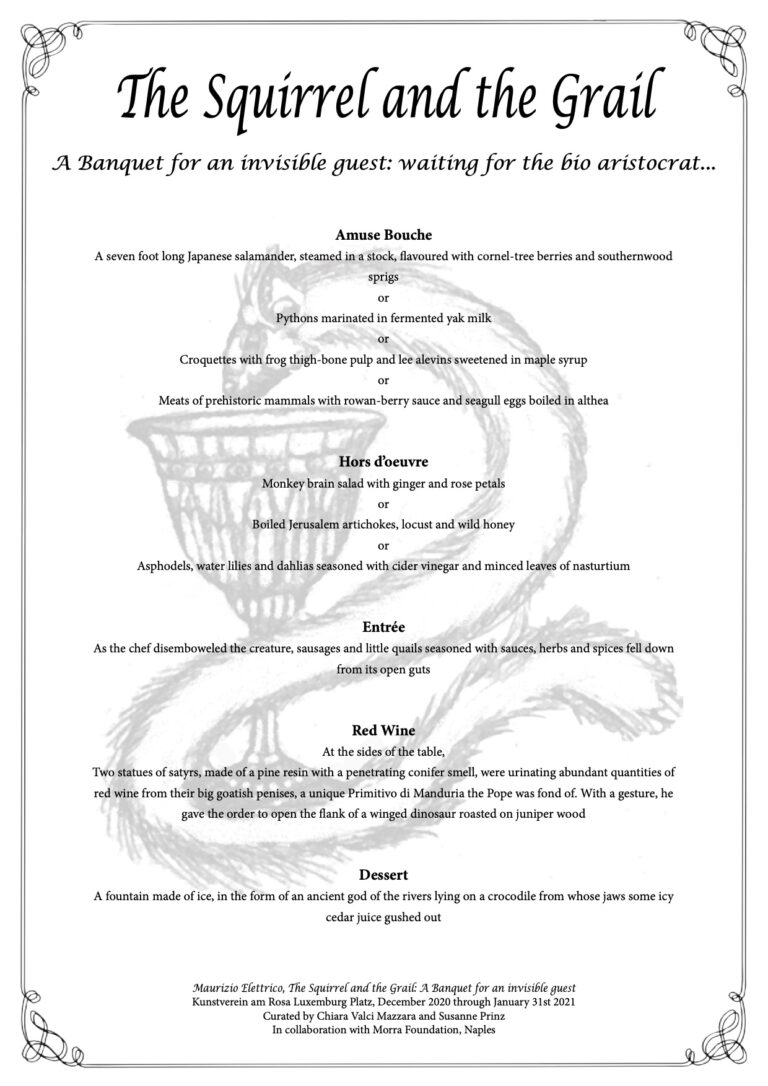